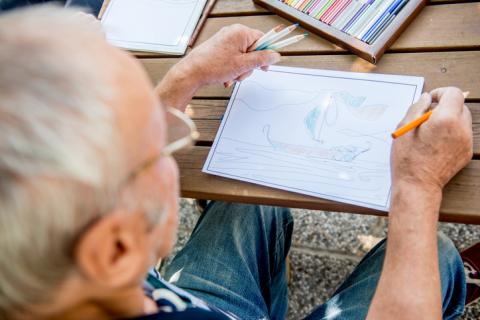 To Create Memories, Put Down Your Camera and Pick up a Pen!

Published on November 10, 2020
Back to Blog & Newsletters

“When people rely on technology to remember for them—counting on the camera to record the event and thus not needing to attend to it fully themselves—it can have a negative impact on how well they remember their experiences,” Fairfield University psychological scientist Linda Henkel told the Association for Psychological Science.

On the other hand, a number of studies suggest that drawing a picture has the opposite effect. Simultaneously using both our eyes and our sense of touch, interacting with what we’re seeing as we transfer it to paper, helps us retain the memory of what we’ve seen. We might be better off to create a graphic arts memoir rather than a photo album of our trip.

In fact, drawing can provide a real memory boost—so much so that researches from the University of Waterloo in Canada say it’s a great way to remember anything, not just scenery. What’s your favorite trick to recall a person’s name or other bit of information? Do you write it down? Repeat it a few times and concentrate on it? Maybe you try the old memory hack of associating a name with a picture (for example, recalling the name of a new acquaintance named Lily Barker by picturing a noisy dog holding a flower).

The University of Waterloo researchers conducted experiments on a group of college students, as well as on a group of seniors, to find out which techniques helped them best retain a memory. Participants were asked to either write out a word, listen to information about it, or to draw a picture of the item.

Both the college students and the seniors retained memories best by drawing—and, reported the team, “This effect was especially large in older adults.”

As we grow older, normal changes in memory can make it harder to recall things. Most of the changes are in areas of the brain that handle words and multi-tasking. But, said the Waterloo team, “In contrast, we know that visuospatial processing regions of the brain, involved in representing images and pictures, are mostly intact in normal aging.”

This also holds true for people with Alzheimer’s disease and other memory loss. Brain imaging shows that the artistic abilities of people with dementia may be retained even when other abilities are lost. “We think that drawing is particularly relevant for people with dementia because it makes better use of brain regions that are still preserved, and could help people experiencing cognitive impairment with memory function,” said study author Melissa Meade. “Our findings have exciting implications for therapeutic interventions to help dementia patients hold on to valuable episodic memories throughout the progression of their disease.”

Drawing and other forms of art also provide great brain exercise, and a boost to all-around good health. According a study authored by the late Dr. Gene Cohen, who was a pioneer in the study of aging and creativity, seniors who participate in an arts program report a higher overall rating of physical health, fewer doctor visits, less medication use, a reduction in falls, and fewer other health problems.

Art programs are available for people with every level of skill and ability who wish to participate, no matter their physical or cognitive challenges. Older adults can find art programs through senior living communities, community colleges, lifelong learning classes, senior centers, or their local parks and recreation department. Many art museums offer outreach programs, some designed for people with memory loss. Classes and programs may be conducted online these days so that participants can express their creativity in socially distanced safety.

Source: IlluminAge AgeWise with information from the University of Waterloo and the Association for Psychological Science
Back to Blog & Newsletters